Phases of the Moon: Aspects for Beginners

An aspect is a word astrologers use when two planets are within a certain number of degrees of each other.  The aspect itself has it's own kind of symbol showing how many degrees are between the two planets.  This connection between two planets within the circle of a chart helps show how the energies symbolized by the planets interact.

Two planets close together are said to be in conjunction.  The symbol for a conjunction looks like this:

At New Moon, the Moon conjuncts the Sun.  In the sky, we see no moon.  On our calendars, the symbol looks like this:

On an astrological chart, the Moon conjuncting the Sun looks like this: 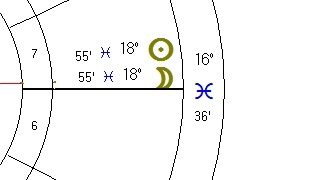 NOTE: This new moon is located on the Descendant - it occurs right at sunset.

A second example of a conjunction represented on a chart: 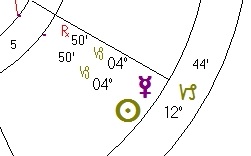 NOTE: Here the Sun and Mercury are shown to be at the same degree in Capricorn.

A conjunction of two planets is fascinating to watch if possible and can be just as fascinating to interpret.  Some planets energies mix better than others.  The closer the planets are together in the chart the more 'jostling' will happen.  The identity and symbolism of the one planet will interact and mix with the other planet very strongly.

A conjunction is what is known as 0 degrees between planets.  However, planets are still considered conjunct when they are within up to 8 degrees of each other.